There is an unmistakable authentic feeling about the House and the greens. The mansion's oak-framed walls, and foundations made from rock stones, are from the early 18th century. Some of the timber and rock-beddings of the house are from the second half of the 16th century. The materials have most probably been retrieved from the ruins of the nearby but since disappeared iron furnaces and forge building. Nuggets of ferrous ore, smelting slag, and clay debris of the tiny furnaces' chimneys, are still being found below the surface of the eco-campus grounds. In the 1800s the cottage was a dwelling for workers who made charcoal, and in the early 20th century it became a small cattle-farm. Acquired some sixty years ago by an army general on retirement, the house was transformed into a country-house type of lodge, and enlarged several times. 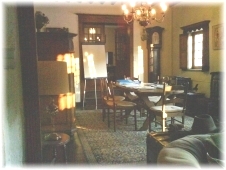 The interior is decorated with century-old furniture made locally, and there is a seldom seen collection of antique travel equipment, steamer trunks, and related luggage from around the world*. The mansion lends itself to multiple uses and purposes. There are rooms and spaces for small group courses and for individual face to face teaching and coaching sessions, for reading a book from the leadership and arts libraries, and for arts' type of creativity workshops. The House and garden have become an iconic meeting place for the school's alumni and friends, and for guest faculty. Serenity and charm pervade the atmosphere at the House and its surroundings.

more pictures of the site: here

* In 2014 the school co-opted the patronage for the preservation of antique travel equipment and related journey items and publications of thought leaders of the 19th century. In the House one finds, for example, a remarkable luggage piece, and books, of George Lansing Raymond (1839-1929) who toured Europe in 1890-1891. He was a foremost professor of arts, aesthetics, and oratory at Princeton University (thereafter at George Washington U.). He had already resided in Europe, from 1865 to 1868, during which time he took F.T. Vischer's Aesthetik courses at the Eberhard Karls University Tübingen, and Greek archaeology lectures of Ernst Curtius at Göttingen University and the Berlin Museum. More at www.belmal.be  and www.ecole-malletiers.be

© Copyright 2021, The Thierry Graduate School of Leadership, Belgium. All rights reserved for all countries. Page update: 2021-04-18